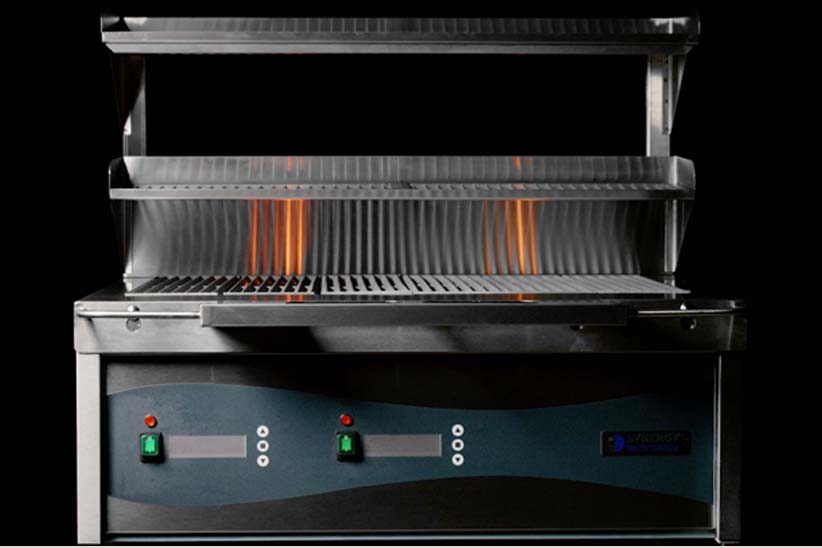 Synergy Grill Technology are in their element with eGrill launch

Ten years ago, Synergy Grill Technology transformed the gas grill market when they launched the original Synergy grill, featuring patented and game-changing, vapourisation system. Now, employing the specialist knowledge that they have amassed over the last decade, Synergy Grill Technology is set to revolutionise the electric grill sector like no other, with the launch of the eGrill.

Featuring never before seen technology, the new Synergy eGrill range is built around a patented system of elements which delivers focused and exceptionally high heat to enable faster cooking times and electricity savings up to a massive 25%. Thanks to a patented atomisation process, that is similar to that found in Synergy gas grills, the natural food oils are then used as a secondary heat source, thus turning fat into free fuel. This delivers an environmentally responsible grill which saves 12 tons of CO2 residue per year, in comparison to a standard electric grill.

As the eGrill range also atomises fat, there is no fat tray for chefs to clean and no risk of irresponsible disposal of fatty waste. With no fat tray, not only is the Synergy eGrill quick and easy to clean, but it can reduce the number of duct and extraction baffle cleans required by a factor of seven, resulting in a cleaner, less polluted working environment for kitchen staff.

Justin Cadbury, Chairman of Synergy Grill Technology, believes that the eGrill has the potential to change the electric grill market even more fundamentally than the original Synergy Grill transformed the gas grill sector:

“This Synergy eGrill is an industry changing new product for those who prefer electricity to gas but want lower energy costs and better food quality, further widening our portfolio for greatest choice in grills where we specialise. It has taken us a longer time to launch the new electric grill because, quite simply, in order to be called a ‘Synergy Grill’ it has to meet certain criteria including: less energy usage, carbon footprint reduction and, of course, money savings. Inspired by 10 years of specialised knowledge base in grill technology, our brand new patented eGrill technology ticks all of these boxes, providing a superior electric solution to commercial kitchens worldwide.

As we increasingly move into a more environmentally friendly and sustainability conscious era, electric grills are becoming more frequently requested, especially from countries who are looking to switch to 100% electric in the coming years including the likes of Spain, Italy and Portugal. We are delighted and proud of our achievement to develop a product that complements our existing product base so perfectly with our existing gas-powered products grills.”

Delivering more succulent food with a higher weight yield, food cooked on a Synergy eGrill is self-basted in its own natural vapour, resulting in no over-charring or the ‘black smoke’ taste synonymous with grilled food. Instead, food cooked on a Synergy eGrill is gently smoked for a tender food product with an intense BBQ flavour and defined bar marks without the need for gas or charcoal.

Synergy eGrill’s are available in Synergy 600 and 900D models, as well as an outdoor cook station.

Synergy Grill Technology is encouraging operators to #ChallengeSynergy at this year’s Hotel, Restaurant & Catering show by taking their gas bill to stand P505 to see how much they could save when they switch to Synergy. Utilising the company’s cost savings...
Read More

The more you delay, the more you pay! With gas prices hitting the headlines once again and wholesale costs reportedly seeing a 250% surge since the start of 2021, Synergy Grill Technology has seen a significant rise in visits to its cost savings calculator:...
Read More

Synergy Grill Technology has been presented with the Energy Efficiency Award at the annual Footprint Award ceremony for the second year running. This comes following their win in the same category in 2020, as well as their Sustainable Catering Equipment Manufacturer...
Read More

Synergy Grill Technology is delighted to have been chosen as the ‘grill of choice’ by the organisers of the World Steak Challenge for the fourth consecutive year. The event provides steak producers with a much-needed platform to showcase product quality, breed...
Read More
Download a brochure
Ask a question
Book a free Demo