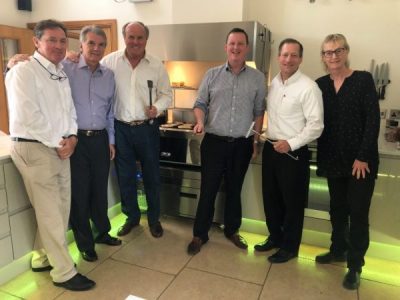 Synergy Grill Technology has today revealed that they have signed an exclusive partnership with
Garland (a Welbilt Company) which will see the Cambridge-based brand’s award-winning, patented
technology become available in Garland’s new XHP Chargrills.

Exclusively available to the North and South American markets, the launch of the Garland XHP High
Performance Broiler truly marks the next step in Synergy Grill’s technologically driven direction and
allows U.S., Canadian and South American customers the chance to reap the many benefits of
Synergy’s pioneering technology such as zero fat disposal, 59% + energy savings and improved food
quality.

Synergy Grill has been considering expanding its partnerships abroad for some time now. However,
as news of the many sustainable and financial benefits of the Synergy brand began to spread on an
international scale, so has the demand for Synergy’s multi-patented technology. As Richard Ebbs,
Director of Commercial & Marketing at Synergy Grill Technology, who helped shape the deal,
explains:

“We were introduced to a number of U.S.-based companies through Doug Fryett from the
Fryett Consulting Group. Doug helped us form our approach to selling in America. We spent
considerable time, making sure that whoever we chose to partner with, shared our passion
for the product, our vision for the brand, and our values and culture. We had significant
interest from eight global companies; however, Welbilt® was a natural choice when it came
to deciding which supplier to work with, given their outstanding brand reputation and
history, not to mention the fact that they are one of the continent’s biggest suppliers of
prime cooking equipment.”

Do you know what makes the Synergy Grill like no other? If not, then now is the time to find out as the team at Synergy Grill Technology showcase their innovative products in a series of online demos. Running throughout May & June, the online events will see...
Read More

Synergy Grill Technology is delighted to announce the appointment of Steve Simmonds as National Account Manager in what is a brand-new role for the company. Steve joins Synergy with 24 years’ experience in the catering distribution industry, including 8 years in a...
Read More

Synergy Grill Technology are in their element with eGrill launch

Ten years ago, Synergy Grill Technology transformed the gas grill market when they launched the original Synergy grill, featuring patented and game-changing, vapourisation system. Now, employing the specialist knowledge that they have amassed over the last decade,...
Read More